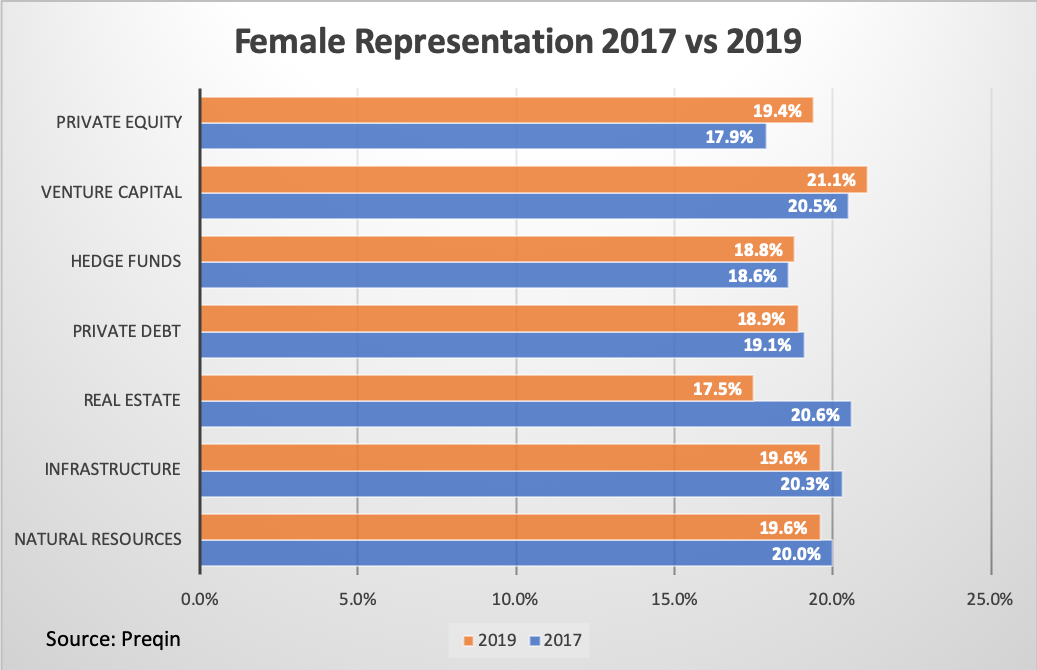 Women make up about one in five employees at private equity firms around the world–far from parity but still an improvement over two years ago when data providerPreqin last studied the question. At senior levels, women make up barely more than one in 10.

According to a fact sheet released in advance of its full report, Women in Alternative Assets 2020, Preqin found that in the two years since its 2017 study, the percentage of women in private equity has grown to 19.4 percent, up from 17.9 percent–see chart above.

It is not clear how many people work in private equity around the world. But going with 100,000 as a rough estimate translates into an increase of 1,500 women over the two years–not taking into account any organic growth in the industry.

Most women in private equity occupy the junior ranks. Just under a third of employees at the junior level (30.6 percent), including analysts and associates, are women. The percentage falls to just over one in four (26.0 percent) for mid-level positions such as senior associates, VPs, directors and principals. At the senior level, managing directors and partners on up, the percent drops to 11.5 percent.

In the march to gender diversity, private equity is roughly in line with the entire alternative investments asset class, which Preqin defines to embrace venture capital, hedge funds, private debt, real estate, infrastructure and natural resources. Women make up 19.7 percent of employees across all global alternative investment firms. That is up from 18.8 percent two years ago.

Notably, only private equity, venture capital and hedge funds saw rises in the percentage of women on their payrolls over the two-year period. Women saw a drop in representation at private debt, real estate, infrastructure and natural resources firms. The drop was particularly steep at real estate firms, to 17.5 percent from 20.6 percent.