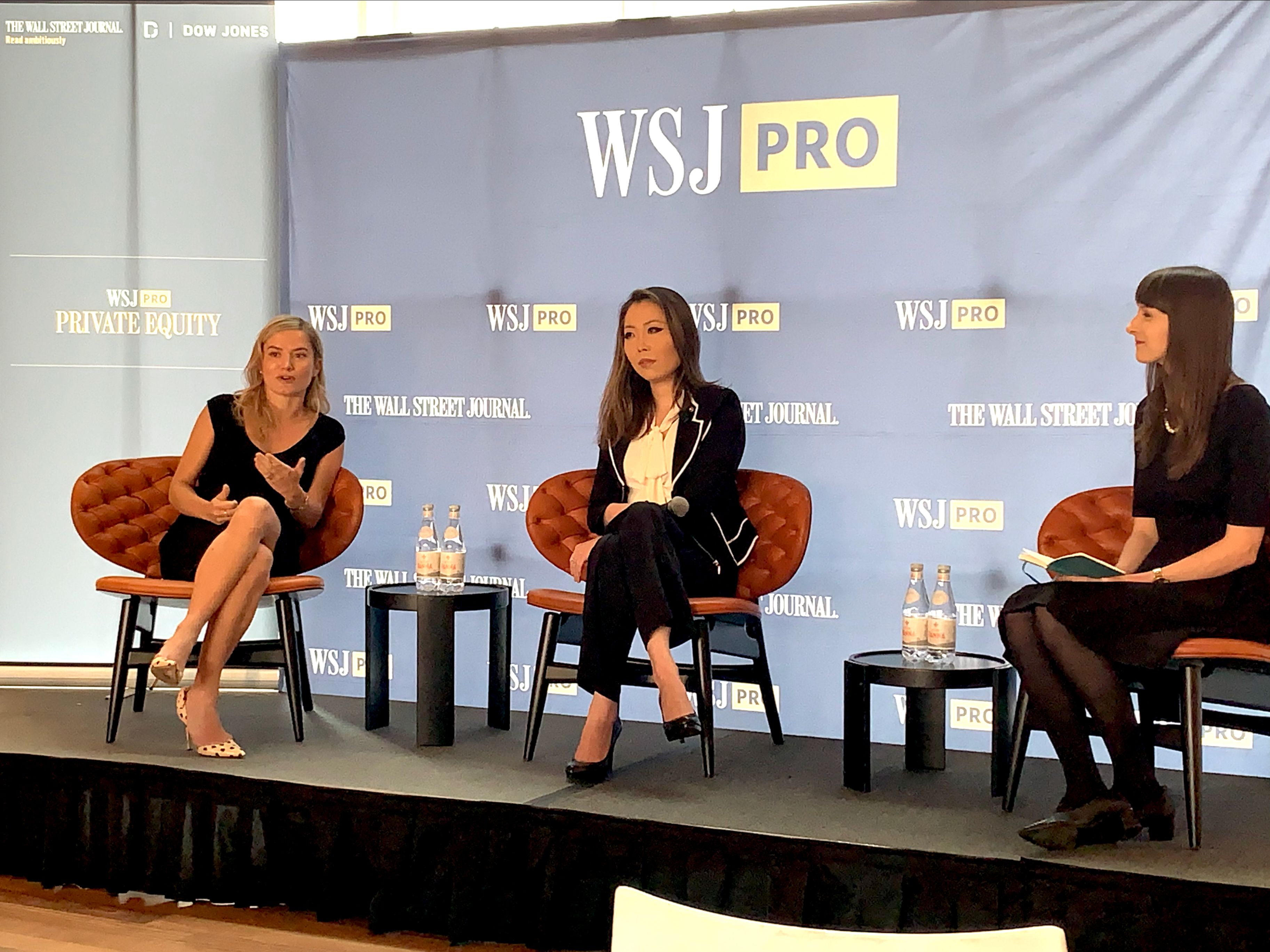 Olga Kaplan, a technology investor at Goldman Sachs, recalls a time earlier in her career when she was in her 20s sourcing new investments in b-to-b software. That meant spending a lot of time with male executives 20 to 30 years her senior.

“I would say probably once every two weeks there was some sort of inappropriate comment…or an offer to fly to Paris in a private jet, which happened multiple times,” said Kaplan (seated at left in picture). Then again, she added, “It’s a lot better now than it used to be.”

Indeed, Kaplan and her fellow speakers at last week’s “Developing Women Leaders” conference in New York City, sponsored by WSJ Pro, had plenty of war stories to share. But they all agreed that women have a lot more opportunity today to thrive in private equity than when they were just starting out.

Not that challenges don’t remain. Perhaps the biggest: a dearth of women holding senior leadership positions at private equity shops; women are simply not present to advocate for gender-diversity at their firms, to press for family-friendly benefits, to mentor female colleagues. Meantime, the pervasive work-hard, play-hard culture across the industry contributes to a high drop-out rate among mid-level women executives who want to spend more time with their families.

“One of the biggest challenges we face is actually attracting women to the firm,” said Joan Solotar, senior managing director at Blackstone Group, and the author of an influential 2013 article in the Harvard Business Review, “Truth for our Daughters.” Eight years ago, when Solotar helped launch the Blackstone Women’s Network, just 10 percent of applicants and 15 percent of the incoming class of professionals were female, Solotar said. Today, thanks in part to on-campus recruiting efforts made by the network, 30 percent of applicants and about 45 percent of the 2019 incoming class are female.

Blackstone has also taken multiple steps to make jobs more appealing to women. The firm extended maternity leave from 12 to 16 weeks and offers a “phase-back” program to ease the transition back to the workforce. It plans to cover fertility benefits starting early next year.

As part of a program started in London and since rolled out globally, Blackstone invites in speakers to advise employees on how to achieve better work-home balance. It also hosts “dine-arounds” where senior partners, both male and female, take groups of junior women out for a meal to discuss challenges that women face at the firm.

“Women need to know that they’re supported in their professional development,” said Solotar. “The same is true for men as well.”

Below is some of the best advice suggested by speakers to women looking to make it to the top rungs at a private equity firm:

* Demand the same depth of feedback from supervisors as that given to male colleagues. Some supervisors have a tendency to hold back on such feedback to spare feelings. But it puts women at a disadvantage to stay in the dark about areas they need to improve in.

* Don’t buy into society’s expectation that wives defer to husbands when it comes to career. René Yang Stewart, a principal at software investor Vista Equity Partners, and co-head of the firm’s growth equity fund, said that she and her husband, a successful technology executive, moved from San Francisco to Austin, Texas so that she could take a new job. “He had to leave his and basically make sacrifices,” Stewart said. “When we go to social events in Texas, people automatically assume we moved to Texas because of his career…When they find out [the truth], they don’t know what to say.”

* Don’t let your gender or race affect or influence how you do work. “As a minority you will inevitably face subtle and not-so-subtle discrimination and biases,” said Stewart. “Rather than let them eat away at me or getting really worked up, I called people out when I needed to but then I moved on and just focused on doing good work.” Summed up Laura Kreutzer, the WSJ Pro assistant managing editor who interviewed Stewart: “In the words of Taylor Swift, ‘shake it off.'”